In previous essays we have amply demonstrated that the subject “faith alone” is not a biblical subject and therefore a subject not to be discussed. It has only been discussed so far because certain religious advocates vehemently insist that salvation is predicated on “faith alone!” It has been pointed out that the scriptures teach just the exact opposite. James explicitly states that salvation or justification from sin is “by works” and “not by faith alone.” James teaches the truth: “You see then that a man is justified by works, and not by faith only” (James 2:24 NKJV).

Therefore, when discussing salvation by “faith alone,” it is not a biblical subject! When we speak as the oracles of God on justification, the biblical subject then is, “NOT BY FAITH ALONE.” Biblically, salvation is contingent on grace, faith and works. The most ridiculous statement I ever read was that we are saved “By grace alone, through faith alone, to God alone is the glory.” If salvation is by “grace alone” then that would exclude “faith!” And if salvation is by “faith alone” then that would exclude the wonderful grace of God.

The truth is that salvation is not by any one thing alone. Salvation originated with the Father, the Son and the Holy Spirit, not any one of them alone. Salvation is contingent on grace, the death of Christ, the blood of Christ, faith, repentance, confession of faith, baptism and being faithful! All of this can be summed up by stating that salvation is by grace, faith and works. Grace is an unmerited gift of God and includes everything God has done for us, even giving us the gospel plan or conditions of salvation. Anything that we must do to appropriate the forgiveness of sin is the work of God. For example, baptism, repentance, and yes, even faith, is something man does, but they are all the work of God.

Work the Works of God

Believe is the Work of God

To “believe” is just as much a work that man does as it is to “repent and be baptized!” Just because to “believe” is a mental or an intellectual act does not exclude the work of man. To “believe” is an action word and something that man does even though it is intellectual and invisible. The “faith alone” crowd excludes “baptism” as a human work, but I don’t think that even they exclude the command to “repent” as a prerequisite of salvation. Therefore, according to their practice it is not “faith alone;” it is “faith” plus “repentance,” that equals salvation.

One thing that I remember a grade school teacher taught me is that “a verb is a word that has feet on it!” In other words a verb is a word that is active or has works attached to it. Jesus said that the work of God is to “believe” in him whom the Father sent into the world (John 6:29). We shall examine the verb “believe” and demonstrate that it is active with works of obedience in order to be saved.

John 6:28-29
Then they said to him, “What must we do, to be doing the works of God?” Jesus answered them, “This is the work of God, that you believe in him whom he has sent.”
ESV

The term “believe” in the above text is a verb. A verb is a word that has legs and feet on it. It is full of action and is not passive. Believe translates from pisteusete, second person plural, present subjunctive from pisteuo. The present subjunctive presents the action as a continuing possibility. Therefore, in the text above in John 6:29 when Jesus said, “This is the work of God, that you believe in him whom he has sent,” the force of the verb is “sustained believing”—that you might keep on believing! To believe in Christ is not an isolated action—it is a sustained action.

Salvation from sin is “not by faith alone!” We have abundantly proved that faith in Jesus is a work of man and yet Jesus said it is “the work of God” (John 6:29). On the beginning day of the kingdom of God thousands listened to the good news and asked,

Acts 2:37-41
“Brothers, what shall we do?” 38 And Peter said to them, “Repent and be baptized every one of you in the name of Jesus Christ for the forgiveness of your sins, and you will receive the gift of the Holy Spirit. 39 For the promise is for you and for your children and for all who are far off, everyone whom the Lord our God calls to himself.” 40 And with many other words he bore witness and continued to exhort them, saying, “Save yourselves from this crooked generation.” 41 So those who received his word were baptized, and there were added that day about three thousand souls.
ESV

They were already doing the work of God by believing in the Christ (Acts 2:36). But “not by faith alone” would they be saved. To be saved from their sins they were commanded by the apostle Peter to “Repent and be baptized every one of you in the name of Jesus Christ for the forgiveness of your sins, and you will receive the gift of the Holy Spirit” (Acts 2:38).

Thus faith, repentance and baptism are all the works of God even though something that man does. Salvation then is by grace, faith and the works commanded by God. God is the author of eternal salvation to all who obey him (Hebrews 5:8-9). 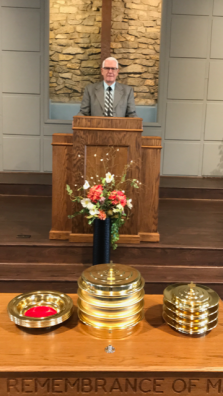