“Faith only” advocates will explain away every scripture that mentions that baptism is requisite for salvation from sin. And our present scripture is so explicit that “baptism now saves us,” that no one in his right mind can misunderstand it:

1 Peter 3:18-22
18 For Christ also suffered once for sins, the just for the unjust, that He might bring us to God, being put to death in the flesh but made alive by the Spirit, 19 by whom also He went and preached to the spirits in prison, 20 who formerly were disobedient, when once the Divine longsuffering waited in the days of Noah, while the ark was being prepared, in which a few, that is, eight souls, were saved through water. 21 There is also an antitype which now saves us—baptism (not the removal of the filth of the flesh, but the answer of a good conscience toward God), through the resurrection of Jesus Christ, 22 who has gone into heaven and is at the right hand of God, angels and authorities and powers having been made subject to Him.
NKJV

Let us examine the plain teaching of the apostle Peter in this context.

Christ Suffered and Died to Bring Us to God

Christ is the archetype of the innocent suffering for the guilty—the righteous for the unrighteous. He is our example in human suffering and we must imitate him in this as in all things human and divine,

1 Peter 2:21-25
21 For to this you were called, because Christ also suffered for us, leaving us an example, that you should follow His steps: 22 “ Who committed no sin, Nor was deceit found in His mouth”; 23 who, when He was reviled, did not revile in return; when He suffered, He did not threaten, but committed Himself to Him who judges righteously; 24 who Himself bore our sins in His own body on the tree, that we, having died to sins, might live for righteousness—by whose stripes you were healed. 25 For you were like sheep going astray, but have now returned to the Shepherd and Overseer of your souls.
NKJV

Under the Old Testament system of sacerdotal sacrifices the offering up to God of the blood of bulls and goats was done over and over again. But under the gospel, Jesus Christ as the perfect sacrifice suffered and died [once–hapax] to bring us to God and everlasting life: “For Christ also suffered once for sins, the just for the unjust, that He might bring us to God, being put to death in the flesh but made alive by the Spirit”(1 Peter 3:18 NKJV).

Two actions concerning Christ are here affirmed. He was “put to death” and he was “made alive,” both of which are second aorist participles, and point to a definite time when these events took place. They are related to the leading verbs in the context, [“suffered”–apethansko] and [“might bring”–prosagoo). Therefore, Christ “suffered” when he was “put to death in the flesh.” And he then was “made alive in the Spirit” in order that “he might bring us to God.” This is simply another way of announcing the gospel plan of salvation (1 Corinthians 15:1-4). 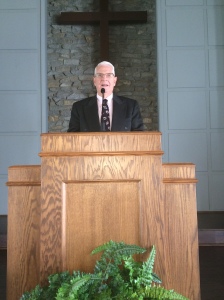