From prison Paul addressed the church in Philippi, “together with the overseers and deacons” (Philippians 1:1). There is no authority for the “one man pastor system” found in almost all denominational churches. Neither is there any foundation for the hierarchy of the Roman church, with the Pope as the head of the church.

There is only one head of the church and that is Christ the Lord:

“And God placed all things under his feet and appointed him to be head over everything for the church, which is his body, the fullness of him who fills everything in every way” (Ephesians 1:22-23).

Each congregation of the church universal is to be governed by a “council of elders,” or “group of elders.” Paul charges Timothy not to neglect the gift given to him by this “body of elders”:

“Do not neglect your gift, which was given you through prophecy when the body of elders (presbuterion-πρεςβυτεριον) laid their hands on you” (1 Timothy 4:14).

This “group of elders” is described in the New Testament by several synonyms as depicted in the following chart: 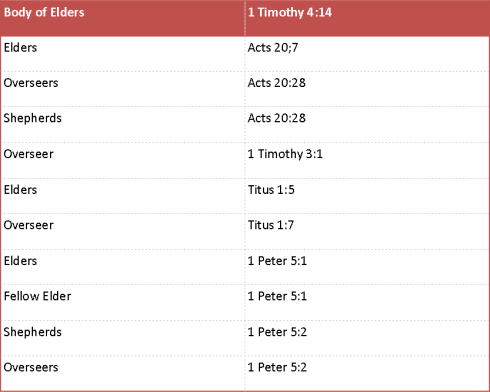 All of these terms are based on the NIV translation of the scriptures. The same will result from other standard translations. Notice that in the context of Paul’s speech to the Ephesians elders, three synonyms are used to describe the same group of men. They are elders, shepherds, and overseer (Acts 20:17, 28).

Observe also in the context of the qualifications of men being considered to carry out the function of governing the congregation, the synonyms overseer and elders are used as convertible terms (1 Timothy 3:1; Titus 1:5, 7).

Finally, in the first epistle of Peter, he describes himself, not as the first Pope, but as a “fellow elder.” And then he describes the class of men of whom he was a “fellow” as being elders, shepherds and overseers:

1 Peter 5:1-4
To the elders among you, I appeal as a fellow elder and a witness of Christ’s sufferings who also will share in the glory to be revealed: Be shepherds of God’s flock that is under your care, watching over them—not because you must, but because you are willing, as God wants you to be; not pursuing dishonest gain, but eager to serve; not lording it over those entrusted to you, but being examples to the flock.  And when the Chief Shepherd appears, you will receive the crown of glory that will never fade away.
NIV

Would not a lot of confusion in the religious world be done away, if only men would go back and restore the simple New Testament plan of church government, with Christ as the head of the church, and a plurality of men over each congregation, with full autonomy for the care of each congregation of the Lord’s people?