In the gospel, according to Mark, we read the following conversation,

Now as He was going out on the road, one came running, knelt before Him, and asked Him,

WHO IS ONLY THE GOOD MASTER OR TEACHER?

The person who came to Christ in this account was rich, young and a ruler; therefore, he is commonly denominated as “the rich young ruler.” He kneeled before Christ, and addressed him as, Good Master or Teacher (Greek-didaskalos). The act of kneeling before Christ, and the title by which the ruler addressed Christ, calling him Good Master, is indicative of reverence, worship and respect that should only be paid to God.

The reply that Christ gave the ruler was probably not expected, for he said, “Why do you call me good? No one is good but One, that is, God” (Mark 10:18). Jesus gently reproved the rich young ruler for not realizing the importance of using the term “good” as a title of honor and respect. Christ was worthy of the title Good Master, but it seems the ruler applied the title to Christ without recognizing Christ as a divine person. In effect, Jesus was saying,

BARNABAS WAS “A GOOD MAN” IN A RELATIVE SENSE

There is nothing wrong with the use of the word “good” as an adjective to describe a person. For instance, the Bible calls Barnabas, one of the associates of Paul, “a good man” (Acts 11:24). Barnabas was not good in the absolute sense, but he was a good man in the sense that good predominated in his life. He was said to be “full of the Holy Spirit and of faith.” When the Bible speaks of Barnabas as “a good man,” it does not use the word good as a title of honor to exalt Barnabas above other men. Therefore, the word good is legitimate when used to describe a person’s character, but it is wrong when it is applied to any man as a title of honor to exalt him above other men. The statement of Jesus to the ruler teaches us that we should be very careful about using any term as a title of honor to exalt one man above another man in the church.

THE TYRANNY OF THE PRIESTHOOD!

When Jesus began his public ministry, he found that the people were being tyrannized by the priesthood—the Scribes and the Pharisees, who had exalted themselves above the people, and were looked upon as being greatly superior in knowledge and wisdom, and were marked out as such by their titles of Rabbi, Master, etc. Much of the trouble in the religious world today is caused not by the common people, but the priesthood; men who have gone off after higher learning, and have exalted themselves as being superior to the other people by their titles of honor and glory. Most of the false doctrine being taught today originated from the doctors of the law, and as long as people bow down to such men as being infallible in understanding and knowledge, there will always be division and false doctrine in the churches as described by the apostle Peter:

But false prophets also arose among the people, just as there will be false teachers among you, who will secretly bring in destructive heresies, even denying the Master who bought them, bringing upon themselves swift destruction. 2 And many will follow their sensuality, and because of them the way of truth will be blasphemed. 3 And in their greed they will exploit you with false words. Their condemnation from long ago is not idle, and their destruction is not asleep (2 Peter 2:1-3 ESV).

In the days of Christ, the scribes and Pharisees did just about anything to gain the attention of the people. They were fond of the popular applause that was poured out upon those who wore honorary religious titles. They delighted to be seen of men, and therefore, they distinguished themselves from the people by making broad their phylacteries and the borders of their garments. All of this tended to make them a special class among the Jews, and gave them special power over the people. This was clearly wrong, and Jesus condemned such in no uncertain terms. He said that they loved,

Jesus was often called by his friends and disciples Rabbi and Master, and he never once condemned the use of those titles when applied to himself, but he absolutely prohibited his disciples to wear those titles. While Jesus does not mention such titles as Father, Reverend, Pastor, Pope, Dr. and other titles of modern usage, they are clearly condemned in principle just as much as Rabbi, Master and Father. It is noteworthy that we do not read in the Bible of Archbishop Timothy, the Right Reverend Barnabas, Pope Peter or Dr. Paul. Jesus said that the relationship which obtains between the members of the church is that of brethren (Matthew 23:8).

It is nothing short of blasphemy when men refer to some Pope or Priest as Holy Father. Since the church is a family, God is our Father, and he alone should be addressed by the exalted, honorary title of Father:

“For this cause I bow my knees unto the Father of our Lord Jesus Christ, of whom the whole family in heaven and earth is named” (Ephesians 3:14-15 NKJV).

When Paul and Barnabas were at Lystra, there was a man that was a cripple whom Paul healed. When the people of Lystra saw what Paul had done, they thought that the gods had come down to them in the likeness of men, and they exalted Barnabas with the title of Jupiter, and Paul with the title of Mercurius, for he was the chief speaker; and they went about to prepare to worship Paul and Barnabas. When they realized what the people were about to do, they would have none of it, and rent their clothes, and ran in among the people and said,

“Men, why are you doing these things? We also are men with the same nature as you, and preach to you that you should turn from these useless things to the living God, who made the heaven, the earth, the sea, and all things that are in them” (Acts 14:14-15 NKJV).

In the church let no one be exalted above another by titles of exalted distinction, but let all simply be brothers, sisters and brethren.* 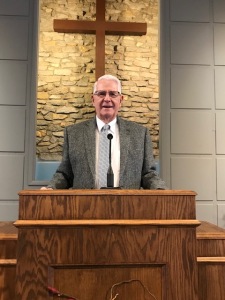