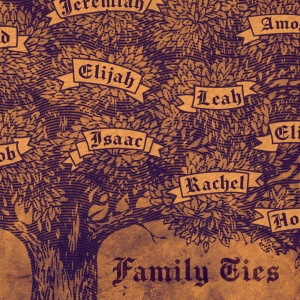 Good morning. We hope you are adjusting to your stay at home because of Covid-19. I heard one member would go sit in a chair and ask himself a question. And then he would move to another chair and answer his question. In other words he was talking to himself. That reminds me of a story that my mom told about when she was growing up. There was a man that was always talking to himself! They would kid him about it. One day they asked him why he was talking to himself so much. His answer was classic. “I like to talk to a smart man and I like to hear a smart man talk!”

Today is Easter Sunday and we have a lot of good memories of hunting Easter eggs and family get-together on this holiday. We will have the opportunity to share the joy with little children again. Later in our service today we will remember the death, burial and resurrection of our Lord when we take communion as we do so each Sunday.

God created the family and nothing can replace fathers, mothers, children and the extended family. The apostle Paul spoke of the earthly and spiritual family to the church at Ephesus: “For this reason I bow my knees to the Father of our Lord Jesus Christ, from whom the whole family in heaven and earth is named” (Ephesians 3:14-15 NKJV).

It is remarkable, that the earthly family of Jesus Christ did not believe in him during his earthly ministry. On one occasion after Jesus had been teaching the crowds in parables he came back to his hometown of Nazareth. When he arrived there, he began teaching in the synagogues. The hometown people were astonished at his wisdom and miraculous power. They asked,

“Is this not the carpenter’s son? Is not His mother called Mary? And His brothers James, Joses, Simon, and Judas? And His sisters, are they not all with us? Where then did this Man get all these things? So they were offended at Him” (Matthew 13:55-57).

We notice from this passage that Jesus had a mother named Mary. He also had four brothers and at least two sisters. He also had a legal father, because the bible says, “Is not this the carpenter’s son?” So Jesus grew up in a regular Jewish family. It is hard for us to understand why they did not believe in him. They all grew up in the same family. They all went to the same synagogue. They all heard the same bible lessons on the Sabbath day. And yet the text says, “So they were offended at Him.” But Jesus said to them, “A prophet is not without honor except in his own country and in his own house.”(Matthew 13:57-58).

When Mark recorded this event of how Jesus reacted to his family, the text says, “And he wondered at their unbelief” (Mark 6:6).

Later in his ministry, Jesus was staying in Galilee because of the opposition to him around Jerusalem and Judea. On this occasion, his family rebuked him for not going to Judea and Jerusalem for the Feast of Booths:

“Therefore His brothers said to Him, “Leave here and go into Judea, so that Your disciples also may see Your works which You are doing. For no one does anything in secret when he himself seeks to be known publicly. If You do these things, show Yourself to the world.” For not even His brothers were believing in Him” (John 7:3-5 NASB).

Therefore, not only did his family take offense at Him, but according to John, even his brothers did not believe in him! And so what we have in describing this particular event is the unbelief of the family of Jesus Christ. In order to become his spiritual family is will be

necessary for them to believe in Him and his Heavenly Father! His family needs faith in the Christ! But what is faith? According to the Bible in the book of Hebrews, “Faith is the substance of things hoped for, the evidence of things not seen.” (Hebrews 11:1). From this explanation of faith we discover that faith is the foundation of what we believe. Note the word substance. The prefix “sub” means something that stands down under. For example subterranean is a passage way under the earth. Submarine is down under the ocean or water. Sub-flooring is the flooring that is down under the main floor. So in the same way faith stands down under everything that we hope for spiritually and otherwise. But it is not a blind faith, for it is built on evidence—the evidence of things not seen. We cannot see God, but we can see that we have a lot of evidence that God exists and that He created the world. And we have historical evidence that Jesus was born of the virgin, lived, died, was resurrected and ascended into heaven as our Lord and Savior. “For every house is built by someone, but He who built all things is God” (Hebrews 3:4).

During his earthly ministry Jesus identified his spiritual family on several different occasions. And in every instance Jesus specified that his spiritual family is made up of those who have an active faith and who do the will of God. For instance on one occasion Jesus came back to his hometown of Nazareth and his family came out to take custody of him because they said, “he has lost his senses.” We read about this in the gospel of Mark, “And He *came home, and the crowd *gathered again, to such an extent that they could not even eat a meal. When His own people heard of this, they went out to take custody of Him; for they were saying, “He has lost His senses.” (Mark 3:20-21 NASB).

About the same time the scribes came down from Jerusalem and accused Jesus Christ of being possessed by Beelzebub–the Prince of Devils. After Jesus had answered them all, his

And yet even on another occasion as Jesus was speaking, “…one of the women in the crowd raised her voice and said to Him, “Blessed is the womb that bore You and the breasts at which You nursed.” But He said, “On the contrary, blessed are those who hear the word of God and observe it” (Luke 11:27-28 NASB).

So we can see from these examples that while Jesus loved his earthly family who did not believe in him, he never the less pointed out that his spiritual family would be those who hear, believe and obey the word of God. I think we can best sum up what it is going to take in order to be a child of God in the spiritual family of Jesus Christ by hearing what Jesus said at the end of his Sermon on the Mount:

Jesus said to be a member of the spiritual family of Jesus Christ we must build on the solid rock of God’s Word, and not on the changing, shifting sand of human opinions.

YOU MUST BE BORN AGAIN

Early in the ministry of Christ he came to his own city. And the Scripture says,

According to this verse, in order to become a child of God and a member of his spiritual family, one must receive Christ, believe in his name, and be born of God. But what does it mean to be born of God?

We are not left in doubt, because a man by the name of Nicodemus came to Jesus by night and complemented Jesus as a great teacher come from God:

In this figure of speech, Jesus explained to Nicodemus that the new birth is of water and the spirit. This is a figurative expression of the new birth. But in the great commission given to the apostles to preach to the whole world, we have not a figurative expression, but a plain spoken expression of what it takes to enter the family of Christ. Jesus said, “He who believes and is baptized will be saved” (Mark 16:15-16). Therefore, to believe and be baptized is equivalent to being born of water and the spirit. And this is validated by the teaching of faith and baptism throughout the New Testament writings.

THE FINAL MENTION OF MARY AND THE EARTHLY FAMILY OF JESUS

“And He led them out as far as Bethany, and He lifted up His hands and blessed them. Now it came to pass, while He blessed them, that He was parted from them and carried up into heaven. And they worshiped Him, and returned to Jerusalem with great joy” (Luke 24:50-52 NKJV).

The ascension took place near Bethany which was nearly 2 miles from Jerusalem and on the eastern slope of Mount Olivet. However on the western side of the mountain it was only a Sabbath day journey from Jerusalem, a much shorter distance. The book of Acts takes up where the gospel of Luke ends. Therefore, in the first chapter of Acts we find out that along with the apostles there was also the family of Jesus and many other disciples (one hundred and twenty altogether-Acts 1:15) who came back to Jerusalem to wait with the apostles who were to receive power from on high:

Then they returned to Jerusalem from the mount called Olivet, which is near Jerusalem, a Sabbath day’s journey. And when they had entered, they went up into the upper room where they were staying: Peter, James, John, and Andrew; Philip and Thomas; Bartholomew and Matthew; James the son of Alphaeus and Simon the Zealot; and Judas the son of James. These all continued with one accord in prayer and supplication, with the women and Mary the mother of Jesus, and with His brothers (Acts 1:12-14 NKJV).

Take note that all of the apostles are mentioned, and also the earthly family of Jesus, including his mother. This is the last time that the mother of Jesus and his brothers appears. The fact that she had returned with the disciples to Jerusalem and remained with John the apostle, instead of staying at Nazareth, shows that both John and Mary were faithful to the dying request of Jesus from the cross.

Though Mary’s name is prominently listed here, it shows that Luke had no thought of giving her special homage as was done in later times! We also know that his brothers are now in the company of this group of one hundred and twenty believers (Acts 1:15). Therefore a great change had come over them since their Divine Brother had closed his labor in Galilee. Earlier they did not believe in him and took offense at him, but now they do believe in him and they are closely identified with the apostles. And when one studies the spread of the church in the first part of Acts of apostles, we take note that James the brother of Jesus, became one of the great leaders in the church around Jerusalem and Judea. Therefore we have confidence that many, if not most of all of the brothers and sisters of Christ, along with his mother, believed and were baptized on the Day of Pentecost and became members of the spiritual family of Jesus Christ. Not even Mary, the mother of Jesus, and his brothers and sisters could enter the spiritual family of Christ without obeying the gospel of Christ! Let us make sure that all of us believe in Jesus Christ the Divine Son of God, repent of our sins and be baptized to enter the spiritual family of Christ! We do not want even one of our earthly family to be left out of God’s spiritual family-the church!