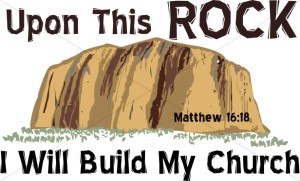 Jesus promised to build one church. Contrary to the popular notion that one may join the church of his choice, the Bible teaches that there is just one church. In fact, Jesus Christ never promised to build but one church. In the area of Caesarea Philippi, Jesus said, “And I also say to you that you are Peter (petros-Greek)), and on this rock (petra-Greek) I will build My church, and the gates of Hades shall not prevail against it” (Matthew 16:18 NKJV). Jesus did not say, “I will build my churches,” but he said, “I will build my church,” singular. Jesus built but one church, and he called it “my church.” The church was not built on Peter, a weak and wavering disciple, but on the rock like Gibraltar confession of faith that Peter made when affirmed “You are the Christ, the Son of the Living God” (Matthew 16:16 NIV). It is not the church of Peter, but it is the church of Christ (Romans 16:16).

The One Church in Ephesians One

In the book of Ephesians, the one church which Jesus promised to build is mentioned several times as an established reality. In the first chapter, Paul affirmed the supreme authority of Christ as the

head of the church, “And He put all things under His feet, and gave Him to be head over all things to the church, which is His body, the fullness of Him who fills all in all” (Ephesians 1:22-23 NKJV). This one church is spoken of as the body of Christ. The word “body” is in the singular.
Christ is the one head, and the church is his one body which together forms a unit. This is a figurative reference to the human organism which has one head and one body. The idea of modern denominationalism is foreign to the teaching of the New Testament. In New Testament times there were many congregations, but they all formed one body or one church.

In chapter two, Paul speaks of the alienation of the Jew and the Gentile being reconciled together in one body by the cross of Jesus Christ (Ephesians 2:16). The gospel is the gospel of peace to both the Jew and the Gentile, for it is through Christ that both have access unto the Father by the one Spirit into the one body. But what is the one body? The answer is the one church: “And He put all things under His feet, and gave Him to be head over all things to the church, which is His body, the fullness of Him who fills all in all” (Ephesians 1:22-23 NKJV).

In chapter three, Paul speaks of the reconciliation of the Jew and Gentile in one body as a great mystery, which in previous ages had not been revealed unto the sons and daughters of men as it was being revealed at that time. The unity of both the Jew and Gentile in the one church, or the one body, manifested God’s great wisdom. Paul had been given a part in declaring this mystery to the whole world. He endeavored, “….to make all see what is the fellowship of the mystery, which from the beginning of the ages has been hidden in God who created all things through Jesus Christ; to the intent that now the manifold wisdom of God might be made known by the church to the principalities and powers in the heavenly places” (Ephesians 3: 9-10 NKJV).
It is the church singular which makes known the manifold wisdom of God, and not modern denominationalism. It is in the one church that God’s glory and wisdom is manifested throughout all ages: “to him be the glory in the church and in Christ Jesus to all generations, forever and ever. Amen” (Ephesians 3:21 NET). 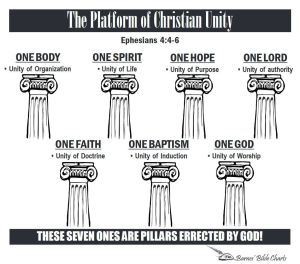 In chapter four, Paul speaks of the unity of the church under the phrase, “the unity of the Spirit.” The unity of the church is outlined under seven units. Paul says, “Endeavoring to keep the unity of the Spirit in the bond of peace. There is one body, and one Spirit, even as ye are called in one hope of your calling; One Lord, one faith, one baptism, One God, and Father of all, who is above all, and through all, and in you all” (Ephesians 4:3-6 KJV). We notice in these verses that there is just one body, and we have already learned that the one body is the church. Therefore, God does not have but one church or one body. It would be just as reasonable to say that there are many Gods or many Lords as to say there are many churches or bodies.

In chapter five, Paul compares the headship of Christ over the church to that of the husband over the wife. He said, “For the husband is the head of the wife even as Christ is the head of the church, his body, and is himself its Savior” (Ephesians 5:23 ESV). The singular nouns body and church are used instead of the plural. This teaches, as in every other place that Christ has but one church or body, and he is the Savior of that body as well as being its head and ruler.