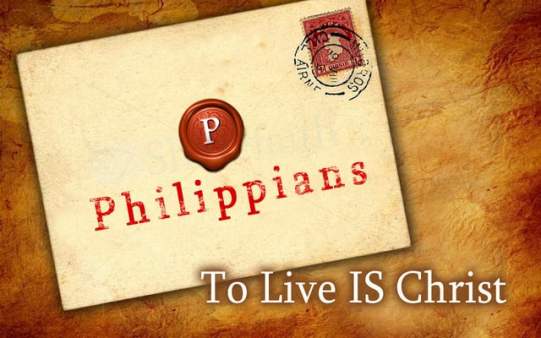 This letter was written and sent to Philippi, a city which originally was called Krenides (Little Fountain), but later, about 350 BC was renamed Philippi in honor of Philip of Macedon, father of Alexander the great.(1) The city of Philippi that Paul visited was located in a Roman colony founded by Augustus after the famous Battle of Philippi, fought between Anthony and Octavius versus Brutus and Cassius, around 42 BC. It was located favorably on the Roman highway Via Egnatia, and only 9 miles from the sea and 12 miles from the port of Neapolis. This city was the first in Europe to receive the gospel because of the loud clarion Macedonian call (Acts 16:9-10) was promptly answered by the apostle Paul along with his companions Silas and Luke.(2)

After the apostle Paul appealed to the Emperor Caesar, he was carried to Rome where he dwelt for two whole years in his own hired house and was granted the freedom to preach the kingdom of God to all of his contacts (Acts 28:30-31). During this period he wrote three other letters namely, Ephesians Colossians and Philemon. These letters record some statements of Paul which are worthy of notice and which will help us to better understand the apostles feelings in this highly personal letter to the Philippians. Paul desired that the Ephesians would pray that his utterance might be free to speak the gospel boldly (Ephesians 6:18-20). Here we note that he is anxious to rid himself of his bonds in order to travel to other places to proclaim the gospel. Again he repeats the same desire to the Colossians in hopes he might preach the gospel in regions unknown if he could be loosened from his bonds (Colossians 4:2, 3). Paul seems to indicate that he will be released and able to travel because of the prayers of Philemon and other Christians who prayed on his behalf (Philemon 22). It seems probable that these letters were dispatched from Rome during Paul’s imprisonment there after about a year.

It is during this time of his Roman imprisonment that Paul is cheered by the arrival of Epaphroditus who had hazarded his life to supply communication between the Philippians and Paul (Philippians 2:25-30). Epaphroditus also brought gifts to help supply Paul’s basic needs.(3) It is at this point that Paul wrote to the Philippians this letter, which is like an open window into his very heart, to assure them of his gratitude for their generosity displayed unto him and even all of God’s people in Rome. He also admonished them to correct some minor disorders which can only harm the body of Christ (Philippians 4:1-3). The church at Philippi was the only congregation on record to have the complete trust of the apostle in that he readily accepted their liberality. This shows that their spiritual condition was excellent and their understanding in the right of a preacher of the gospel to live by the gospel (1 Corinthians 9:5-16).(4) The Philippian congregation, from the very beginning seems to have been very liberal in financial giving, even beyond their means. Paul holds them up as a wonderful example to the other congregations he had helped to establish (2 Corinthians 8:1-15). They had also sent him financial help “once and again” while he was laboring at Thessalonica (Philippians 4:15, 16), and while he was working with the church at Corinth, Greece (Philippians 4:15; Acts 18:5; 2 Corinthians 11:9). It would also be very good for all the congregations of God’s people today to possess the same love toward Christian people and even “all men.”(5)

About midway in Paul’s letter to the Philippians he may have expressed some doubt that he would receive a favorable release from prison (Philippians 2:17; 3:11). The members of the Philippian congregation must have yearned for Paul’s release upon reading his sad words. An incident seems to have happened in Rome about this time that caused the apostle some concern. This was the marriage of the Emperor Nero to an infamous, adulterous woman named Poppaea, who was a proselyte to Judaism.(6) She could have swayed Caesar against Paul’s appeal.

Even as Paul awaited his trial (Philippians 2:23, 24), he still made known the gospel among the Praetorian Guard, in the Palace and in all other places (Philippians 1:13-18; acts 28:30, 31). It seems that it would have taken at least two years for this to take place, so if Rome was the place of writing this letter, it is usually placed last of all the prison letters Paul wrote.(7) Therefore we conclude the letter to the Philippians was written somewhere between A.D. 61-63, preferably the early part of 63 A D, since we know (Acts 28:30-32) he spent two years in Rome.(8)

Now with his fellow servant Epaphroditus having recovered from sickness (Philippians 2:23-30), Paul sends him back to Philippi with this letter full of joy and thanksgiving. Paul’s letter to the Philippians written from the dark pagan Roman prison was a letter of joy much like the beautiful midnight hymn of Paul and Silas from the dark depths of the Philippian dungeon (Acts 16:25).(9)

Paul’s letter to the Philippians is worthy of every Christian to be read, studied and applied to live the best life that we can to glorify God and our Lord Jesus Christ.*

*Shelby G. Floyd wrote this paper April 5, 1962 while studying at Freed-Hardeman College (Now Freed-Hardeman University) in Henderson, Tennessee. I earned an A- from my teacher—Olan Hicks. My wife, Sarah typed this paper late at night on an old Underwood typewriter. She deserved as much credit as I received for her hard work. Back then it was difficult to correct mistakes. This usually meant you had to type the whole paper over again! We have come a long way with modern communication technology for which I am thankful.